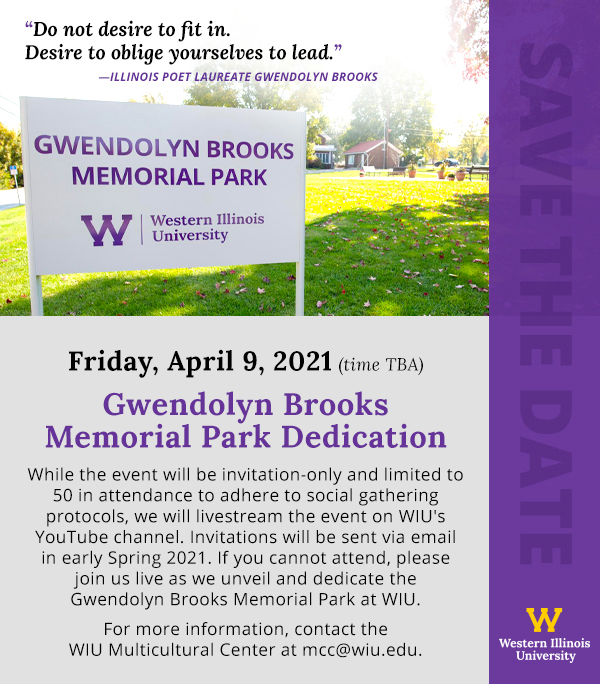 The new Gwendolyn Brooks Memorial Park Dedication will take place on the Western Illinois University Macomb campus Friday, April 9, 2021 (time TBA). While the event will be invitation-only and limited to 50 in attendance to adhere to social gathering protocols, the University will livestream the event on WIU’s YouTube channel. Invitations will be sent via email in early Spring 2021.

The Gwendolyn Brooks Memorial Park has been established on the WIU-Macomb campus on the site of the former Gwendolyn Brooks Cultural Center (GBCC) , on the corner of Adams and Normal streets, to honor the legacy of an American icon and award-winning poet, the Illinois Poet Laureate, Pulitzer Prize winner, nurturer of excellence and Western Illinois University’s first Honorary Doctorate recipient.

According to Carl Ervin, program coordinator for the WIU Multicultural Center, the park is located on the ancestral lands of the Illinois (Inoca) indigenous people, and on the site of the former Black Cultural Center (BCC). The BCC was established in 1969 as a result of the WIU Black Student Association and a WIU student task force. It was dedicated as the Gwendolyn Brooks Cultural Center on March 21, 1970. The GBCC, also known as “The Black House,” served as a home away from home for 32 years before moving to the Multicultural Center in August 2009.

The memorial park was made possible by donations from alumni and friends, including significant contributions from the WIU Black Alumni Committee; a State of Illinois grant; and the WIU Foundation. As part of the donations, the park features benches and a engraved brick patio area for gatherings, landscaping and plaques honoring the space.